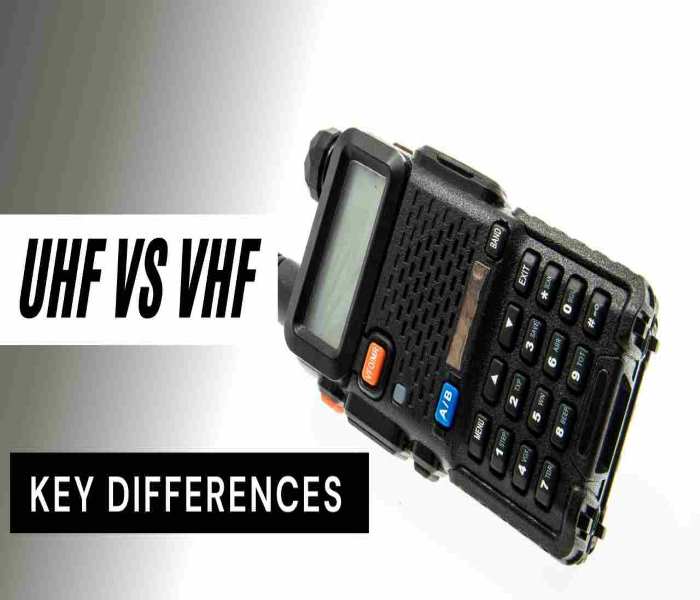 UHF VS VHF – What Are The Key Differences?

Radio frequencies, as designated by the International Telecommunications Union (ITU), range from 3 hertz (Hz) to 3 terahertz (THz) on the electromagnetic wave spectrum and form the basis on which radio technology is founded. Wavelengths within the VHF and UHF range are particularly accessible to ham radio enthusiasts, but what are the differences between UHF VS VHF?

Due to the longer antenna requirements, VHF equipment tends to be bulkier, though less costly. UHF equipment, while generally pricier, tends to be more portable.

Both UHF and VHF effective transmission ranges can be extended with repeater-style technology.

Are Common Frequencies Used Across the World?

Allocation of spectrum licences within VHF and UHF are not standardised globally and overlap arises across radio, television and communications.

VHF communication used in aviation has a dedicated range to itself for obvious safety reasons. International FM radio shares a common range, as does marine radio. TV ranges vary from country to country.

Some VHF and UHF frequency allocations are largely, but not perfectly, harmonised globally. In amateur radio, VHF 2 metres and UHF 70 cm are almost universally shared across the world enabling global contact in the right atmospheric conditions. Other commonly used bands, such as VHF 6 metres or 4 metres, may not be available for amateur radio operators in all countries.

What channels are VHF and UHF?

The International Telecommunication Union (ITU) has allocated 15 band numbers to the radio spectrum of frequencies of which VHF is band 8 (30 MHz to 300 MHz), and UHF is band 9 (300 MHz to 3GHz).

Within VHF (band 8) and UHF (band 9), frequency licences are issued to communication, radio, and TV broadcasters allocating their portion of the radio spectrum over which they can transmit.

Amateur Radio Operators sometimes channelise their VHF and UHF frequency allocations for particular purposes such as the input and output of repeaters. This channelisation approach, involves subdividing a range of frequencies for dedicated purposes.

UHF is used for TV broadcasts, navigation systems, cell phones, and emergency services, as well as other commercial undertakings requiring 2-way radios. Wi-Fi and Bluetooth devices also utilise UHF frequencies, in addition to other gadgets and devices around the home and the office.

VHF frequencies are used by TV broadcasters, digital and analogue radio broadcasters, emergency services, aviation and marine operations, as well as commercial operators requiring the transmission distance that VHF can provide such as farmers, foresters and mining companies.

UHF VS VHF Advantages and Disadvantages

Do police use UHF or VHF?

The police use both UHF and VHF frequency radio communications, and while they continue to do so, they are increasingly moving toward encrypted digital communications. The dedicated police channel frequencies used depend on the location of that police force and is not the same across the country or between countries. They are more likely to use UHF in urban environments and VHF in rural areas.

Can VHF talk to UHF?

Simplex communication requires both transmitter and receiver to be on the same frequency, regardless of whether it is VHF or UHF. However, spread spectrum or frequency hopping technologies may use multiple frequencies simultaneously.

Two-way communication on a VHF or UHF frequency relies on the communicators tuning into the same frequency at the same time. Within the transmission range, when someone is transmitting on that frequency, no one else can transmit, which has resulted in communication protocols being adopted.

For instance, when communicating over the main public marine channel, it is normal protocol for the two parties talking to switch to a different channel to continue their conversation in order to keep the main marine calling channel open in case of emergencies or urgent announcements.

Does UHF Go through walls?

Due to its high frequency and short wavelength, UHF radio waves can penetrate walls, so UHF technologies are suitable for indoor reception and within urban areas. However, anyone who has worn Bluetooth earbuds, or used their home Wi-Fi will know that UHF penetration has upper limits depending on the frequency used, and in general, while UHF can go through walls, it is blocked by hills and natural vegetation, for instance.

How Do VHF and UHF Frequencies Propagate?

VHF radio waves generally propagate by a ground wave which allows signals to refract over the horizon, up to around 160 kms. VHF waves are blocked by hills and large structures and when reflected off several structures the resulting multipath propagation can result in signal interference.

UHF is largely line of sight and rarely goes over the horizon. It is heavily attenuated by atmospheric moisture but UHF penetrates buildings more easily than VHF. Radio repeaters can be used to re-transmit communications over longer distances for both UHF and VHF if required. Due to its shorter wavelength, it’s more practical to create directional antennas for UHF which can be used to improve effective operating range, such as fixed data links.

Every now and then, when the atmospheric conditions are right, VHF and UHF waves can travel far longer distances, and well beyond the normal line of sight. Phenomena such as tropospheric ducting or sporadic-E are types of radio propagation that enable ham radio enthusiasts across the world to talk to each other over VHF and UHF over much longer distances, spawning ham radio competitions and allowing communications to flourish.

While the VHF and UHF bands sit next to each other on the radio spectrum, their propagation characteristics are noticeably different, making each of them suited to different uses and situations.

Across both VHF and UHF, different operators utilise different portions of the spectrum range for purposes such as TV and radio broadcasts, navigation and other transmission requirements. Users of VHF and UHF include commercial, industrial, military, public and emergency services, and of course an enthusiastic cross section of amateur radio operators.

In certain conditions, and with a degree of testing, tweaking and experimentation, ham radio users have the potential to use their bands within VHF and UHF to reach a wide audience of fellow enthusiasts.