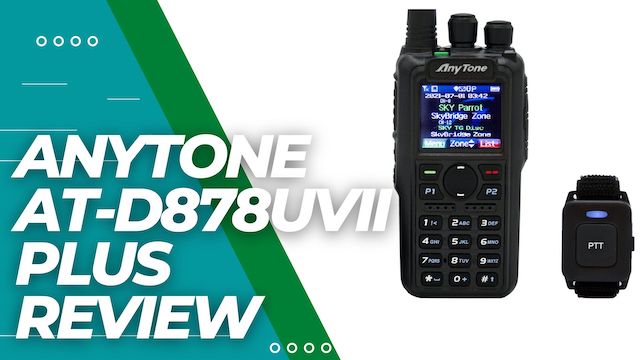 AnyTone AT-D878UVII Plus is one of the better known DMR radios. This versatile radio is feature-rich and although not cheap, it does offer good value for money. Available features include built-in GPS, Bluetooth, and the ability to transmit and receive APRS transmissions.

The ability to work with APRS is kind of a big deal here. AnyTone AT-D878UVII Plus model series is one of the first (perhaps the first) radio manufactured in China to include APRS. Conventionally, this technology shows up in radios manufactured in Japan, for devices within the Yaesu ecosystem.

The radio does a decent job of TX and RX using APRS. It’s not ideal, and can be annoyingly buggy at times, but it can get the job done.

-Works well in digital as well as analog mode.

-The implementation of APRS is somewhat buggy.

The important difference here is that the Plus model gets room for 500,000 contacts. That’s a significant upgrade over the 200,000 contacts in the previous models.

On that note, for whatever reason, the company has chosen to go with this weird naming scheme. This radio’s model name is AT-D878. Everything else represents iterations of the product. I think it would be more sensible to give the device a product name that’s easier for the customers.

The radio is compatible with DMR Tier I and Tier II. So, it shouldn’t have trouble communicating with any DMR radio on the market.

While it works on digital transmission, the handheld radio works as an analog transceiver as well. As a dual-band radio, AnyTone AT-D878UVII Plus works with VHF and UHF bands. Shifting between digital and analog modes is quick and pain-free.

The radio works on an impressive 3100 mAh battery. That’s enough to provide the radio with a lot of juice and it makes good use of it.

On that note, 5W is usually the max RF output for handheld ham radios. While more power seems alluring, it’s likely not a healthy choice. Smart money is on using low power and letting a good antenna or repeater do its job.

An interesting thing here is the Bluetooth PTT. It’s a button on a small strap that allows the user to speak on the radio without actually handling it. The button’s a nice touch for going hands-free, though the DMR radio supports other means as well.

You could connect any Bluetooth headphones or headset with the radio for communication.

There are other interesting features as well, like built-in GPS and front face programming with VFO channels. The presence of FFP allows users to add repeaters and other frequencies directly to the handheld radio, without first going through programming.

Even with the FFP, there’s a lot to learn and understand about this handheld DMR radio. Though increasingly popular, it’s still a new technology that people are still getting familiar with.

To that end, the company offers a “training course” that includes tutorials, support, training, and guides. Anytone’s (or BridgeCom Systems) proclaimed value for this course is $97.

I’m not a fan of the idea. Providing support, manuals, and guides is the responsibility of the seller/manufacturer. Attaching a monetary value to it, even if it’s offered for free, is a terrible practice.