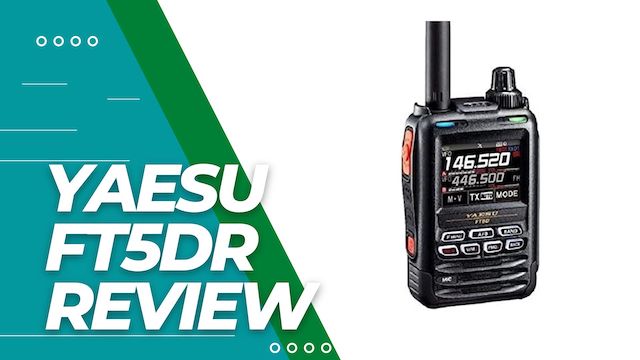 Yaesu FT5DR is a competent addition to the company’s fusion radio lineup. The dual-band ham radio can work with VHF and UHF bands, with the capability to listen to two frequencies simultaneously.

There are two independent receivers to work on these frequencies. Two LED indicators above the display present visual feedback for the working of the A Band and B Band.

As you look at the Yaesu FT5DR, it’s impossible not to draw parallels with the lower model, the Yaesu FT3DR. Both radios have a similar design, features, and general functions. It’s often said that Yaesu developed the FT5DR because the global chip shortage made it difficult to source the parts for the 3DR.

Thankfully, rather than throwing together a radio with what was available, Yaesu took the time to make improvements on the radio. Yaesu FT5DR has better voice clarity, works better with Bluetooth, and a relatively cleaner look.

It is slightly larger and bulkier than the FT3DR, but the 5DR has a cleaner profile. This is especially visible with the buttons on the side of the radios. The FT3DR has something of a bulge with the buttons, while the 5DR is sleeker. It’s a small change but it works very well for the aesthetics.

Differences aside, both these radios belong to the fusion lineup and share overlapping features. Related accessories, including the battery, are compatible between these models.

Speaking of the battery, while the 2200 mAh Li-ion battery looks sufficient, it’s a good idea to get another battery pack. The charging times can be painfully long and it’s usually better to swap batteries rather than waiting around for the pack to charge.

Though the battery takes its sweet time charging, it does a good job when it is in action. The battery can last a day even when transmitting at the maximum 5W output RF power. The 5W output is fairly standard for handheld ham radios like the FT5DR and this radio seems to handle it beautifully.

The received audio also appears better and louder due to the use of a powerful 1W speaker. A key feature of the FT5DR is its implementation of digital communication, where it’s worth comparing this radio to its close competitor, the Icom ID 52A.

Icom’s offering is slightly longer and bulkier than the FT5DR, though it maintains a similar overall form. A quick difference between the two is that the Yaesu ham radio has a touchscreen, while Icom 52 does not.

The bigger question in choosing between these ham radios is whether you want fusion or D-STAR.

When using features like Smart Navigation, users can track their location or route and save it to a micro SD memory card. Similarly, you could use the micro SD card to store pictures you intend to send or receive.

A lot of data can go into the memory card. Yaesu FT5DR will also accept software updates through its micro SD card.

Since so many features find their place in this expensive package, we expect it to be strong and rugged. The FT5DR doesn’t disappoint on these points. The ham radio has an impressive build quality. It’s rated IPX7, which means it’s waterproof and can spend a few minutes submerged without being damaged.

Though it does a lot of things right, this radio is not without its flaws. An important one is the learning curve for using this. If you haven’t used a fusion radio before, it will take a while to get used to this ham radio.