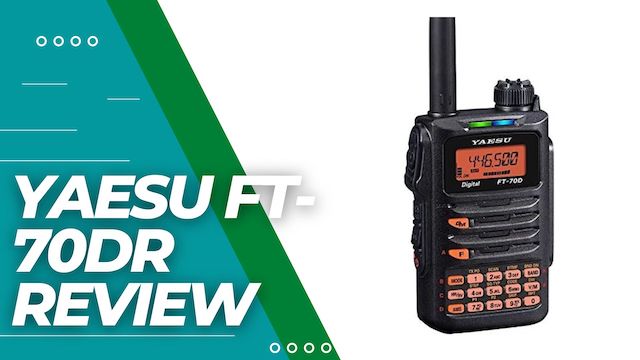 Yaesu FT-70DR is one of the cheaper models on offer from the brand. Yet, it sports some of the most sought-after features from Yaesu, including the digital C4FM communication mode and Wires-X.

However, both these modes are in the basic form. You get a taste of their capabilities, but don’t quite get to enjoy them to the fullest. I suppose that’s the price to pay for picking the low-cost model. Especially when you’re in need of long-range options, or easy to use models.

-Audio volume can get very low.

This seems to be the mood throughout the functioning of this radio. It tends to fall just short of the mark in several features. Then there’s the programming, which is downright atrocious. Whether you go through the process with CHIRP or with Yaesu’s software, hiccups are unavoidable.

Heck, even setting up the radio for programming is unnecessarily convoluted. Here’s a quick run-down of the process:

-Remove the battery from the radio.

-Turn on the radio.

-Proceed with the configuration.

To be fair, there are radios with worse ways of handling programming. But Yaesu isn’t quite supposed to have the same experience. So, while it’s still miles ahead of several similar radios, it is something of a disappointment in Yaesu’s offerings.

The story repeats itself with the audio. The reception is clear, but the voice seems to be muffled. Yaesu says the speaker has a 700mW output. Theoretically, this should be sufficient, but practically, it’s clearly lacking. A better speaker for the transceiver ought to fix it, but for now, the problem does exist.

Yaesu FT-70D/FT-70DR battery seems to have issues as well. It tends to get drained relatively faster and as the charge drops, it struggles more. Purchasing two batteries should solve it, though a better battery from the brand itself is a better approach.

We see the theme with this radio again. It stops short of doing something really well, which makes the experience somewhat more annoying than it should be.

Apart from the aforementioned problem with sound volume, the transceiver handles its transmit and receive duties pretty well. The dual-band radio has a transmit range of 144-148 MHz and 430-450 MHz. Its wideband receive range goes all the way from 108MHz to 579.995MHz.

LED indicators above the screen let you know which band and mode is in action. Both indicators have multicolored LEDs that change color according to the mode and band.

In its arsenal of digital capabilities, Yaesu FT-70DR gives up APRS, which is an important and popular function in higher models of the company. It does, however, maintain Digital Group Monitor (GM) and identification.

Though I’ve pointed out several issues, the radio is not without its redeeming features. The body is built very well and it’s something you know can last, even with rough use. At IP54 protection rating, the radio is splash proof and can survive mild showers, though it’s best to keep it away from water.

Yaesu FT-70DR is often compared to its sibling the Yaesu VX-6R. The VX-6R looks very similar to the 70DR, but these are very different products. Yaesu VX-6R is a tri-band ham radio. It is waterproof (rated JIS7) and lacks digital capabilities.

Overall, I’d say the FT-70DR is a very capable radio, though it doesn’t quite perform as well in a few categories. Though if you can afford a higher budget, it is better to go with the fusion series radios like FT3DR and FT5DR.