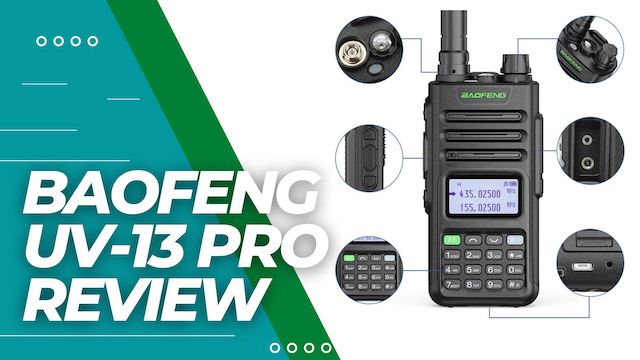 Baofeng UV-13 Pro is a new ham radio offering from the famous low-cost manufacturer. There has been some news about this radio, especially with focus on its high power output 10W and a large battery. On some websites, this battery capacity is advertised as 8800 mAh.

I see all of these as speculation and would recommend taking claims like this with a grain of salt – or a spoonful. For starters, the 8800 mAh Li-ion battery is straight-up impossible. The 10W power output claim is unlikely as well, though not entirely out of the realm of possibility.

A handheld transceiver can have 10W output, but it’s rarely of any use beyond the conventional maximum of 5W. It would be too much of a drain on the battery without much to gain.

Another reason to be skeptical of these claims is that some unethical sellers have a history of pumping up unlikely numbers for the radio they’re selling. You might see listings with such numbers on AliExpress, eBay, or similar sites.

Similar claims floated around with the launch of the Baofeng UV-10R, Baofeng UV-9R Plus, and others. Unsurprisingly, such claims turned out to be false. It’s more than likely that the same holds true here with the Baofeng UV-13 Pro.

A very cool feature is the presence of a USB-C charging point at the bottom of this radio. USB-C is way better and faster than other options and it’s only natural that it gets a preference for most modern gadgets. The radio has also skipped on using cradles, which makes sense. As juice flows through Type C, cradles aren’t all that important.

Another notable feature is that the radio is IPX4 splash proof. This means the radio can handle a drizzle without getting harmed. To be clear, this is very basic protection and I wouldn’t stake much on it.

Baofeng UV-13 Pro offers 999 memory channels. This is a welcome change from the conventional 128 channels or so that most Baofeng radios offer.

As of now, the radio is available through some sellers or eBay, AliExpress, and a few other websites. If you’re interested in this radio, I’d suggest waiting for a little while until it becomes officially available in the USA and gets an FCC registration.