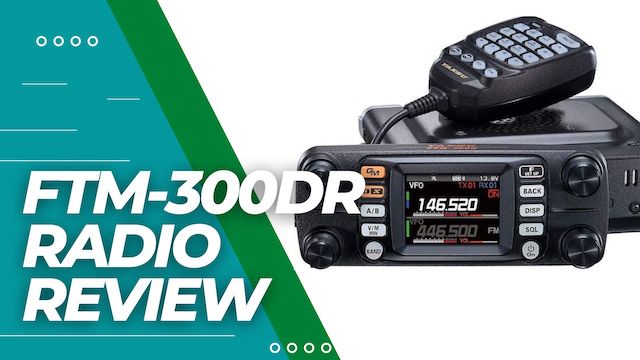 FTM-300DR is one of the newer mobile transceivers from Yaesu. It launched in 2020, so while it’s not exactly fresh, it’s a new product as ham radio models go.

This is a feature-rich radio with good performance and power. It’s a fairly compact unit with the radio about the same size as the FTM-100. It comes with a mounting bracket, which makes things a whole lot easier.

Despite its wonky name, this is a very efficient cooling system. You could run the radio at full 50W RF power for hours before allowing your mind to drift to concerns like overheating. As normal usage goes, FTM-300DR handles cooling so well, there’s no cause to worry about overheating.

However, the radio head (or face) is a bit taller than the body’s height. Although such an arrangement is fairly common these days, so it’s not that big a deal.

The face has a brilliant 2-inch TFT color screen, which shows the channel, frequency, and other relevant information. On the left and right of the screen are the control buttons and beyond those, there are two knobs at each side.

Set Up and Comparisons

The setup is fairly convenient and it’s easy to handle most tasks like reaching the menu and handling most tasks. However, changing and selecting modes can take a while as you navigate inside menus. This isn’t the most convenient option for a mobile radio, since it can be expected that the user would be driving.

To consider differences like these, it’s worth comparing the Yaesu FTM-400DR to the FTM-300DR. The FTM-400DR is a higher, but older model.

Differences between the two are evident with a visual examination. Yaesu FTM-400DR has a bigger face, which accommodates a larger display. This is a full-color touchscreen, which makes it easier to manage settings and operate the radio.

Additionally, the FTM-300DR works better with the B-band than the FTM-400DR. Other features are largely the same. We could say the FTM-400DR fares better on UI while FTM-300DR benefits from its more recent origins.

Saying Yaesu FTM-300DR needs a better UI would be an understatement. The feature-packed radio has a lot of menus and settings to navigate through. That can get annoying very quickly.

Yaesu usually has good documentation, though the FTM-300DR seems to be lacking at the moment. While there is a manual, several key features don’t find their way into it. Users often have to look for additional documentation and manuals on the Yaesu website for these features.

Updating its firmware takes a bit of effort too, but it’s not all that troublesome.

Yaesu FTM-300DR is a new radio off the company’s fusion line, so it also gets some cool features including digital options. The radio works with C4FM, APRS, DG-ID (Digital ID), GPS, voice recording, snapshot function, and more.

Some features, like voice recording, need a microSD card to be inserted into the radio. It also supports Wire-X, but is known to occasionally struggle with it.

As we see, this radio has its faults. However, that doesn’t take away the fact that Yaesu FTM-300DR is a very capable and impressive mobile radio. Especially put up against other shortwave or ham options. It’s full of features and is a very dependable mobile ham radio.