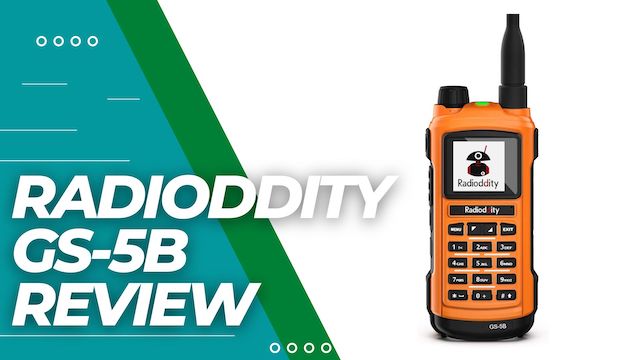 The bright orange Radioddity GS-5B is a departure from the conventional appearance of ham radios. Though the coloring makes perfect sense once you consider that this ham radio is targeted for the outdoors.

If you’re out camping or hiking, the bright color of the radio ensures that the radio is clearly visible even if you drop it somewhere.

Going further with the outdoor theme, the radio has patches of soft TPU material at the bottom, the sides, and at some points on the back. The soft material acts as a shock absorber should the radio fall and protects the device.

Another outdoor themed feature is the flashlight at the bottom of the radio. A bright LED comes on at the touch of a button.

-Programmable via cable or Bluetooth.

-Not compatible with CHIRP software.

Though it isn’t exactly a replacement for a competent camping flashlight, it is fairly useful in its own right. There’s also an SOS mode where the lights flash in blue, red, and white colors. This can make it easier to spot the user should they need assistance.

The aforementioned features are overtly designed to be useful to campers, though the vibe continues throughout the functioning and features of this dual-band amateur radio.

One such feature is the IP56 waterproofing, or rather, water-resistance. At this protection level, the radio can survive a torrential downpour. So, if the user gets caught in heavy rain, the radio will continue to function.

Remember, this doesn’t represent full waterproofing. While the radio will survive heavy rain, it won’t do well being submerged in water.

Beyond the ruggedness, there are a few more interesting features on the radio. It has a built-in S-meter that shows its readings on the clear and colored screen. Other pertinent information like channel, frequency, and more are also available on the screen.

The display has an inverted dark background, which provides the right contrast for text on the screen. The information remains clear and legible even during the day with bright surroundings.

A very innovative feature on this radio is how it is programmed. You could do it the traditional way by connecting a cable to a computer. Or, get in tune with the modern world and have an app connect to the radio via Bluetooth and handle the programming. The app is available for Android and iOS.

I think it’s surprising that so few radios take this route, even though smartphones and apps are ubiquitous. The writing is on the wall and I suppose more radios will follow Radioddity GS-5B on this route.

Another way to program it is through the keypad, though it’s somewhat limited compared to using the cable or Bluetooth. Speaking of the radio’s Bluetooth features, there is a fly in the ointment here.

Bluetooth on the Radioddity GS-5B works for programming, and that is all it does! You cannot connect a Bluetooth headset to the device!

Much like the multiple options for programming, the radio also offers multiple charging options for its 2000 mAh Li-ion battery. You could charge it the classic way using the included charging cradle. Alternatively, it can charge through the micro USB port at the back of the radio.

This option is pretty handy for the outdoors, where the user may choose to power their ham radio through a power bank or similar means. And great for long hikes and long distances.

Once charged, the battery delivers juice for a maximum 5W RF power output from the Radioddity GS-5B. A low power option at 1W is also available. Other notable features include dual PTT, VOX delay, 1750Hz tone, and encryption.