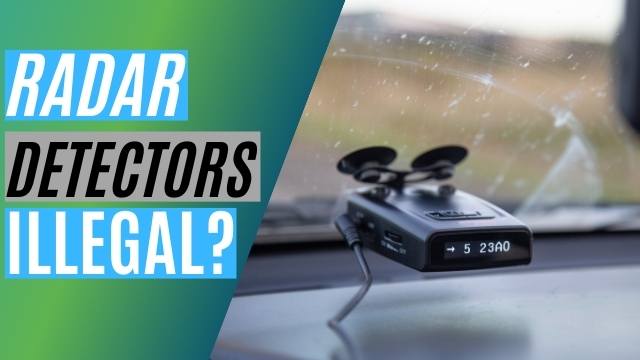 When people think of purchasing a radar detector, one of the first questions they ask is “are radar detectors illegal?” After all, many people intend to use them to detect police radars and avoid speeding tickets and such.

With motives like that, it’s only natural that the legality of these devices would be in question. However, that’s just speculation. Radar detectors are generally legal in the USA for private vehicles.

Radar detector laws and regulations vary depending on the jurisdiction, state, and federal laws. Private cars can use them in most states in America, though commercial vehicles and vehicles weighing over 10,000 pounds will find radar detectors illegal to use.

What Are Radar Detectors?

A radar detector is a small device that many vehicle owners use. Its primary purpose is to detect speed guns used by police or law enforcement agencies.

Being aware of police presence allows drivers to stay within the speed limit and avoid a ticket.

A radar detector may provide audio and/or visual indicators when it detects a radar gun, thus alerting its user.

At their heart, radar detectors are radio receivers. They look for radio waves coming from radar guns used by police officers. The speed guns emit radio waves within a specific frequency range.

A good radar detector will detect the radar miles away, giving the motorist enough time to correct their speed to match speed limits.

In the USA, radar guns work on the following frequency bands:

Corded radar detectors are usually the most accurate and have the longest detection range.

This type of detector includes a cord to draw power from the vehicle. This power source can be the 12V outlet (cigarette lighter) or the cord could be directly attached to the vehicle’s wiring.

Cordless radar detectors use onboard batteries rather than relying on power from the vehicle. As with corded radar detectors, this type too attaches to the vehicle’s windshield using suction cups or similar mechanisms.

This is the least common type of police radar detectors and may be illegal in several states. In this case, the detector is mounted (and hidden) behind the grille and the controls are placed under the dashboard.

Where Are Radar Detectors Illegal?

As we already know, radar detectors are legal for private vehicles and passenger vehicles in most of the USA.

Although, there are some requirements that motorists must fulfill for their use. Radar detector laws vary by state, though there is some uniformity in their use.

Though the law has radar detectors legal in almost all states, they have specific rules for their use.

Also, even if most states allow radar detector use on a private vehicle, their use on commercial vehicles isn’t allowed.

Keeping The Windshield Obstruction Away

According to laws in many states, affixing detectors on the windshield can obstruct the driver’s view of the road.

Some states mention specific areas at the bottom of the windshield where it’s okay to attach suction cups.

Commercial Vehicle Weight Restrictions For Use Of Radar Detectors

Finding safety in the information provided by radar detectors, some commercial drivers may choose to overspeed.

Since many of these are heavy vehicles like trucks and 18-wheelers, speeding is dangerous. The goal is to prevent reckless driving of commercial vehicles.

The state of Virginia only allows law enforcement to make use of radar detectors.

Are Radar Detectors Illegal In Other Countries And Jurisdictions?

Are Radar Detectors Legal In Canada?

Using a radar detector on your vehicle is legal in Alberta, British Columbia, and Saskatchewan.

Most European nations ban radar detectors and their use. You can use a radar detector in Bulgaria, Iceland, Italy, Norway, and Romania. Most other countries see their use as illegal.

Can Cops Detect Your Radar Detector?

The police can see or detect the use of radar detectors. In most cases, a visual inspection can be sufficient, though police also make use of devices like a radar detector-detector.

Basic Working Of A Radar Detector

These gadgets look for specific radio waves emitted by radar detectors. On finding these waves, the device alerts the officer of the presence of a radar detector.

Even though radar detectors are legal, some jurisdictions or police may choose to be more strict with their use.

Apart from Virginia and Washington DC, there are other places where radar detectors are illegal.

There is a federal law banning radar detectors on military bases. There are practical as well as security considerations for this law.

As we’ve noticed, there are federal as well as state laws on the use and legality of radar detectors. But, what if they have different takes on the situation?

In case of such a conflict, federal law preempts state law.

How To Use Radar Detectors

Commonly presented benefits of radar detectors include increased awareness on the road and better speed management.

Although, the biggest benefit and perhaps the most likely reason for their use is to avoid a speeding ticket.

Ideally, the radar detector should have a place high on the windshield and not be blocked by windshield wipers. Many people place it at the top with a cutout near the rearview mirror.

Many states place restrictions on devices covering the windshield. Therefore, placing the detector on the dash is an option, though not the ideal one.

Radar detectors vary in features, but you should consider the following when choosing one:

A detector with a longer range will pick up a police radar from a distance and give you enough time to adjust your speed.

A quality radar detector should be able to tell when a signal is from a police radar gun and when it’s from other sources.

The X, K, and Ka bands are also used by devices like traffic sensors and driver assistance systems. A poor-quality radar detector might give false positives based on other devices.

Some radar detectors include internet connectivity or accompanying smartphone apps. These might offer crowdsourced information on places where detectors give false alarms, speed traps, and other relevant information.

Be Careful Of The Windshield Or Window Tint’s Effect

Radar detectors cannot receive waves through metal. So, if the windshield has a metallic tint, the radar detector will struggle to get the right reading.

Understanding The Laser Jammer And Its Legality

What Are Laser Jammers?

Laser jammers are a counter to LiDAR guns used by police officers to check for a vehicle’s speed.

Lidar guns, or laser speed detectors, allow police to pinpoint a vehicle and check its speed. Laser jammers emit light back at the Lidar guns and confuse the return signal, thus affecting their readings.

In the United States, generally speaking, there are no specific federal restrictions on laser jammers. Though that doesn’t mean their use in a motor vehicle is completely legal.

A Note On Radar Jammers And Their Legality

Radar jammers and scramblers are devices that interfere with radar guns on a broad spectrum, rather than alerting the user as radar detectors do.

Federal law sees these devices as causing “malicious interference” and has provisions for a hefty fine and even jail time for their use. Radar jammers are, therefore, illegal in the USA.

A laser jammer doesn’t see the same fate because it has a simpler approach and isn’t indiscriminately disruptive like a jammer.

Radar Detectors Are Legal, With Caveats

Using radar detectors is perfectly legal in the USA, though there are federal and state-specific restrictions on their use. Radar detectors are illegal in Washington DC and Virginia.

Several states restrict the use of these devices on commercial vehicles, while allowing their use on private vehicles.